Get the AFC Case Study 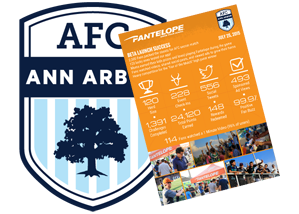 During the championship game, fans joined in on the competition using Fantelope. AFC Ann Arbor fans competed with each other to earn the most points by posting pictures and checking in at the game on social media, using promoted hashtags, and much more!

Download the case study to see how AFC Ann Arbor fans grew their horns using the Fantelope app during the championship game. You will have access to the following fan engagement data obtained during the game: